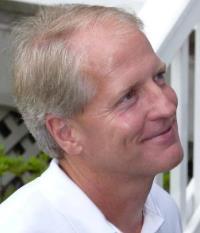 Andrew Geyer was born in Austin and grew up on a working cattle ranch in Southwest Texas. He lived in Austin again in the 80s and 90s, along with stints in Columbia, South Carolina; Tishomingo, Oklahoma; Lubbock, Texas; Russellville, Arkansas; and Aiken, South Carolina. Geyer has been—among other things—a bartender, a waiter, a busboy, a bellhop, a cashier, a landscaper, a construction worker, a manager at a Birkenstock store, a student, a teacher, and a writer. A lover of the outdoors and an avid runner and canoeist, Geyer has traveled extensively in North America, Central America, South America, Europe, and North Africa.

Geyer's latest book is Lesser Mountains.  The tightly knit stories in this cycle delve into the lives of fictional people living in and around the small town of Jordan, Texas. Common themes, shared imagery, and intertwined plots combine to reveal the life arcs of everyday folks who find themselves displaced by profound change. The protagonists for the major plotlines are introduced in the opening story, and the subsequent narratives link the trajectories of their lives in unexpected and fascinating ways—a novelistic effect that makes the whole much more than just the sum of its parts. The collection won a 2020 Independent Publisher Book Award (IPPY) for U.S. South - Best Regional Fiction, Silver Medal; it was named a Finalist in the 2019 American Book Fest Best Book Awards - Short Stories Category.

Geyer's hybrid story cycle Dancing on Barbed Wire, co-authored with Jerry Craven and Terry Dalrymple, and edited by Tom Mack, was published by Angelina River Press in 2018.  These sixteen interlocked narratives move at a clip through time and space, from the Civil War to the present, from the sun-scorched brush country to the lush and sometimes lethal Piney Woods.  Although readers may detect shades of Hawthorne and Faulkner in the haunted houses, serial characters, disembodied voices, and rattling family skeletons appearing in these stories, their ethos is distinctly Texan.

Geyer co-authored with Jerry Craven the alternate history/time travel novel Parallel Hours (Angelina River Press 2017).  This barnburner novel gets underway with parallel catastrophes: the murderous Russian invasion of Baku in 1990 and the Golden Horde of Genghis Khan that destroyed the city in 1221. Thus begins a fascinating tale of alternating time planes when a misstep in either might alter—or abolish—history in both.

He also co-authored the hybrid story cycle Texas 5X5 with Jerry Craven, Jan Seale, Terry Dalrymple, and Kristin vanNamen.  This collection of twenty-five interconnected short stories by five Texas writers, edited by Laurie Champion, was published by Stephen F. Austin University Press in 2014.  The collection was named a finalist for the Foreword Magazine Book of the Year Award in the Short Stories category.

Geyer is the co-editor, with Tom Mack, of the composite anthology A Shared Voice which was published by Lamar University Press in 2013.  The collection was named a finalist for the Foreword Magazine Book of the Year Award in the Short Stories category.  "Gethsemane," by Clay Reynolds, the opening story in the collection, was a finalist for the 2014 Spur Award for Best Short Fiction from the Western Writers of America.

Geyer has also published four other individually authored books, the latest of which is the novel Dixie Fish (2011). His other book-length works are Siren Songs from the Heart of Austin (2010), a story cycle; Meeting the Dead (2007), a novel; and Whispers in Dust and Bone (2003), a story cycle that won the silver medal for short fiction in the Foreword Magazine Book of the Year Awards and the Spur Award from the Western Writers of America. Geyer has published dozens of individual short stories, along with poetry and creative non-fiction. His award-winning work has appeared in Texas Review, South Dakota Review, Southwestern American Literature, and many other literary magazines and anthologies, and has been nominated for the Pushcart Prize. A member of the Texas Institute of Letters and the South Carolina Academy of Authors Literary Hall of Fame, he currently serves as Professor and Chair of English at the University of South Carolina-Aiken and as fiction editor for Concho River Review.